British freelancer Jez Fredenburgh was one of two recipients of the 2019 IFAJ/Caterpillar Bursary, a grant designed to create opportunities for IFAJ members to fund special projects, seek international perspective and push their personal boundaries. Fredenburgh did all that and more, tackling an ambitious research project, learning the art of podcast production and covering a raging global story during the pandemic.

Fredenburgh was inspired by the massive fires that had burned through millions of hectares in Australia, Canada, Portugal, South Africa and other countries. When her proposal to the bursary—funded by machinery manufacturer Caterpillar—was selected for a grant, she headed to Portugal, which had suffered a 500,000-hectare mega-fire that killed more than 120 people in 2017.

“I wanted to know; what happened during a mega-fire?” she said. “What were the causes and solutions to preventing wildfires? What part did land-based activities, such as agriculture, have to play? And what was the risk to other European countries?”

Early in 2020, Fredenburgh traveled through Mação in central Portugal, still charred from the 2017 fires, and interviewed sources in the capital city, Lisbon. Further travels into the Portuguese countryside, Spain and Scotland were put on hold due to the Covid-19 pandemic, but she was able to return to Lisbon in the summer to continue her research and interviews by phone and Zoom.

Fredenburgh pitched story to BBC Future on preventing large wildfires. The editor liked the idea, but suggested she instead pursue an in-depth, 2,000-word feature on the meterological phenomena created by mega-fires.

“This produced an unexpected professional development – my first science feature,” said Fredenburgh. “My research to date helped inform my writing, and I was able to use the situation that unfolded in Mação as the dramatic lead-in.”

The fire meteorology story is scheduled to run soon on BBC Future.

Fredenburgh also used her pandemic time to take Zoom lessons on podcast production. She has applied her new skills to pitch radio reporting on fire issues, and now hosts, produces and edits the main interview each week for Farmers Guardian’s Over the Farm Gate podcast. 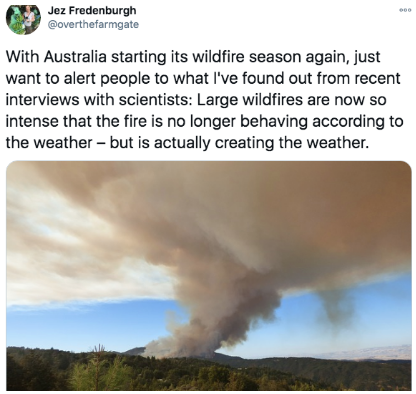 “When we launched the IFAJ Caterpillar Bursary in 2017, we urged members to use it to ‘pursue the extraordinary,’ and there’s no doubt that that’s exactly what Jez has achieved with her award,” said IFAJ Treasurer Adrian Bell, who developed the program in partnership with Caterpillar. “She’s managed to combine valuable personal and professional development with a robust demonstration of the importance of thinking more widely—figuratively and geographically—in her role as an agricultural journalist.

“The program exemplifies the added value that IFAJ seeks in developing such initiatives with commercial partners like Caterpillar. Their two years of support was instrumental in getting the initiative underway and we’re looking forward to finding a new partner to extend the IFAJ Scholars program for a further two-year period,” Bell added.

In addition to Fredenburgh’s work on mega-fires and sustainable water management, the bursary program has also funded:

A report by Fredenburgh on her research into mega-fires is available on the IFAJ website. It is the culmination of dedicated work in a challenging environment. Fredenburgh said her plan fell apart when travel was restricted, but she made the most of the opportunity.

“I just wish Covid hadn’t happened when it did!” she exclaimed. “But even so, I’ve learnt loads, got stuck into a very interesting story, had training which has helped me professionally, and had some adventures and met interesting people along the way.”