The Story Behind the Story: Brett Worthington on His Star Prize Winning Digital Reporting

Home Article The Story Behind the Story: Brett Worthington on His Star Prize Winning Digital Reporting

As Australia and the European Union worked towards a free trade agreement, one of the biggest sticking points was always going to be agricultural market access. For Australian farmers, they wanted greater access to new markets to reduce their reliance on Asia, particularly China. But in return for better EU access, these same farmers were facing having not just more European meat and dairy coming to Australia but also the likelihood of having to stop using some of the most iconic food and beverage names in the world—Gorgonzola, Roquefort and Champagne.

In the case of my story, Popping prosecco’s bubble, I wanted to focus on two contentious geographic indicators Australian producers were already fighting against–Prosecco and Feta.  The debate over GIs coming to Australia aren’t new. Yet despite that, many Australian farmers, and consumers especially, fail to understand why they exist, the role they play.

So often we hear the Australian perspective of trade deals but rarely hear what the farmers on the other side think. My aim was to go to the production regions in Italy and Greece and then to Brussels to meet the bureaucrats negotiating the deals. I wanted to inform Australian audiences a sense of the story behind these names. To meet the farmers who live in these iconic regions and find out why they were fighting so hard to protect their brands and reputations.

I worked closely with the EU Embassy in Canberra and farm groups throughout Europe to arrange the meetings ahead of flying to the other side of the world. Timing issues–particularly a looming federal election in Australia–meant I had to travel to Europe earlier in the year than I would have hoped. This meant we had to scale back plans for television because the visuals in Italy were going to be poor. Had I been able to travel during the European summer, the visuals would have been better (grape harvesting in particular) and we could have filmed a TV feature to go with the online story.

With the trip scaled back, I travelled solo, and focussed on collecting interviews and photos for radio and digital storytelling. This trip could have been a disaster because I had equipment fail after equipment fail. Almost all my equipment, which I have long travelled with and relied upon, broke at some point. Cameras seized, recorders unexpectedly died and iPhone jacks failed. But, from experience as a rural reporter in regional Australia, where you often travel long distances to report stories on your own, in each case I had backups for my backups – with iPhones in particular coming to my saviour. I recorded everything on two iPhones and then was able to sync up the audio that had translations when I returned home. The only downside was I couldn’t monitor the recording in real-time so I had to do multiple tests prior to recording the main interviews to check for echoes and buzzes in the audio. It was a nice reminder about the importance of being prepared for everything to go wrong.

When I returned to Australia, the story got shelved for months because I had to focus on the election. But with that over, I teamed up with a graphic designer and developer to bring all the elements I collected to life. We used the Odyssey format developed by the ABC News Story Lab team to create the online article. This is a story telling template that allows custom design and development to create the best user experience to help tell stories both visually and through the written word.

The graphic designer, Emma Machan, worked on graphics in Adobe Illustrator. When creating the story, we needed to provide balance between the words and visuals. Parts of the story needed to be adapted to work with the graphics. For example, the maps were created to show the location of those affected by geographical indication. The words scrolling over the maps had to match what was displayed on the map at that time. Emma sketched these maps so we could have more fun with them than if we just used a typical Google map.

When creating an online story, you need to hook the reader in the first few lines. The dramatic photography instantly invites the reader to delve deeper into the story and learn more. By creating the graphics and maps, we were able to give readers another element that helped tell the story and create interest. They are both informative and visually appealing to help engage people in the story. The colours used reflect the people who are in the story, their personalities and their strength of character.

The feedback from this story continues to shock me. I think part of its success has been targeting the final products at consumers and publishing it on a Saturday, when people had more time to read the 3,000 words. I had TV and radio elements that went out on the same day to help draw people’s attention to the online story.

Besides always ensuring you have backups, my top tip is to make sure you give yourself time for the writing and editing process – far too often we don’t have the luxury of time to sit with a piece. And be harsh with the edit–we could and probably should have cut more out of this. Just keep reminding yourself “everyone is better for editing” and almost never does anyone say “that should have been longer”. 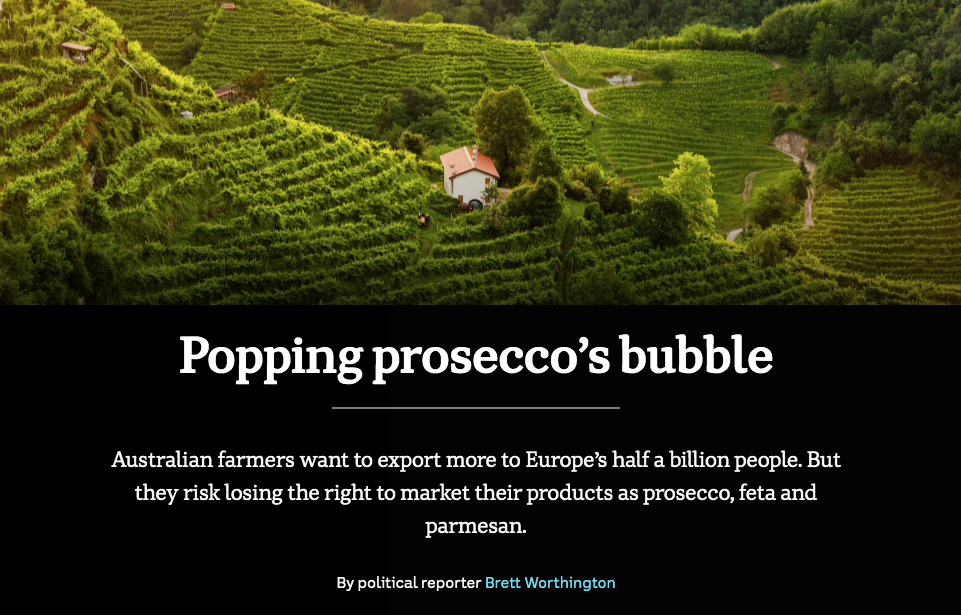